In the ancient times when kings and queens ruled, there was no democracy and most of the punishment, except mostly in Africa, were gruesome.

The history of the white man is a history of abomination, incest, murder, deceit, rape, theft and cannibalism.

Below, the article is based on the tweets of Mandoid (@Bigbounce01). It showcases some of the torture technics used in ancient times. 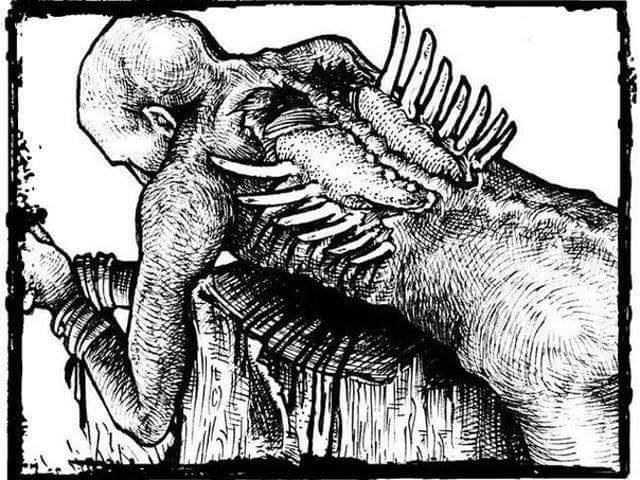 This alleged method of execution believed to have been performed by the Vikings included initially tying the victim’s hands and legs to prevent any movement. The torturer would then stab the victim up toward their rib cage. Every single rib would be carefully severed from the spine with an ax or some other sharp tool. It is believed that victims would often remain alive through this part of the procedure. This left the internal organs on display and salt would sometimes be rubbed into the wounds to increase pain. Finally, the lungs would be pulled out of the body to make it appear as if the victim literally had a pair of “wings.” 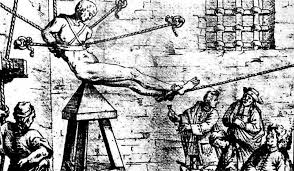 Although more widely used in Medieval Europe, the purpose of the Judas Cradle was to obtain various kinds of confessions by forcing the nude victim onto a chair with a pyramid-shaped seat. The victim’s feet would often be tied together in such a way that moving one leg would increase pain by forcing the other leg to move along with it. The torturer was able to raise and lower the victim with a rope and pulley system, which drove the penetrating part deeper into the victim. Some torturers would additionally place oil on the device, considerably increasing pain. The device was rarely or not at all washed, also increasing chances for death by infection. In some cases, the victim would be rocked or made to repeatedly fall on the pyramid shaped seat to obtain vital information. 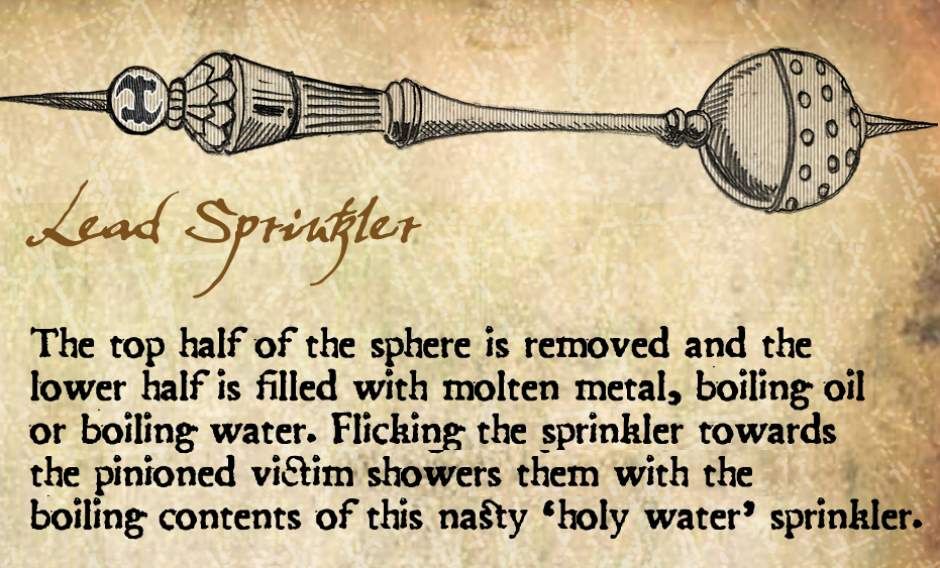 This device, also typically used in the Middle Ages, was filled with molten lead, tar, boiling oil, and other scalding substances. Torturers poured metals into one end to allow for the extremely hot substances to drip over the stomach and other body parts of the victim. Execution would sometimes occur by pouring molten silver into the eyes, resulting in great pain and potential death. 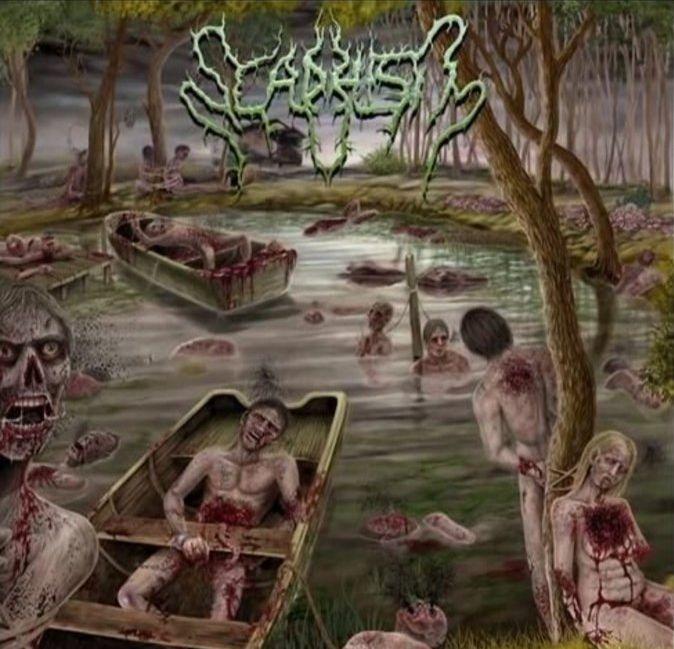 Scaphism, aka “the boats,” was an alleged ancient Persian method of execution where one died by literally being eaten alive. The victim would be placed between two wooden canoes or hollowed out tree trunks with their legs and head protruding outward. The executioners would then force the victim to consume a milk and honey mixture until they developed diarrhea.  Surrounded by the victim’s own feces and vomit, even more of the milk and honey mixture would be applied to sensitive areas of the body. This would attract insects who would feed on the body and lay eggs in the various exposed orifices. With rations of the milk and honey mixture along with water, the victim was unlikely to die of hunger or thirst. Death would be agonizingly slow and usually came from septic shock or gangrene. An account by the Greek historian Plutiarch claimed that it took victims about 17 days to finally die. Chilling, if you ask me. 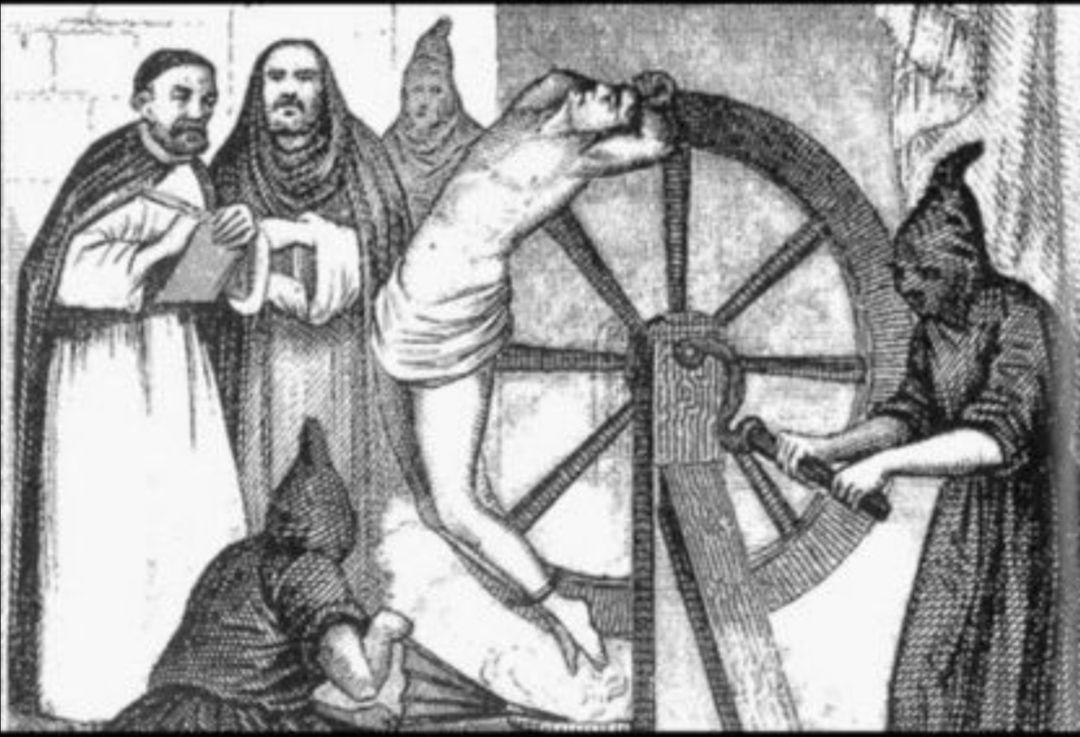 The breaking wheel, also known as the Catherine wheel, was a torture method used for public execution primarily in Europe from antiquity through Middle Ages into the early modern period, by breaking the bones of a criminal and/or bludgeoning them to death. The victim was first tied down the executioner dropped, then the executioner dropped the execution wheel on the shinbones of the convicted person and then worked his way up to the arms. To increase its effect, often sharp-edged timbers were placed under the convict’s joints. Although not commonplace, the executioner could be instructed to execute the convicted person at the end of the first act, by aiming for the neck or heart in a “coup de grace”. 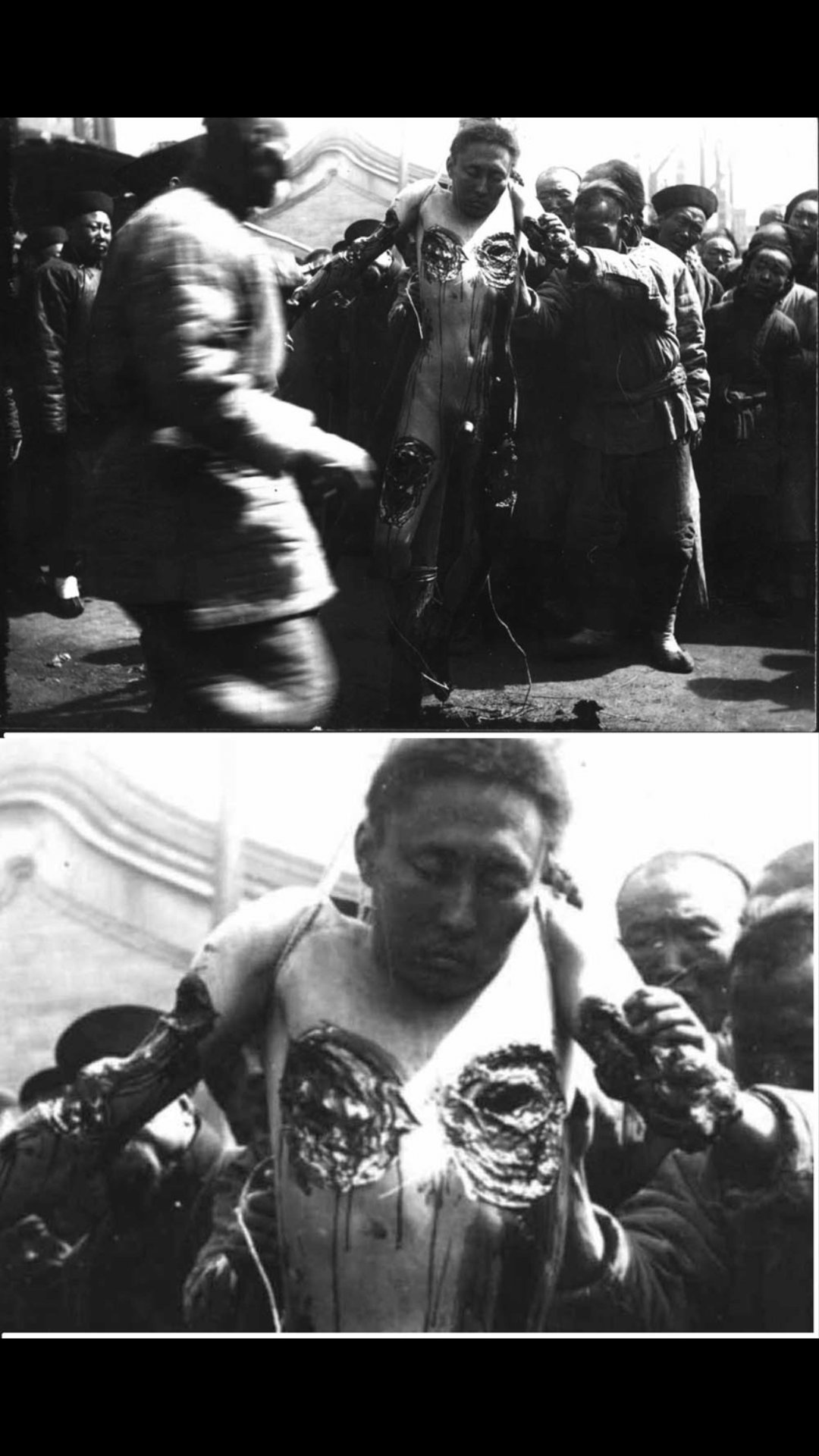 Lingchi, also known as “death by a thousand cuts”, was a brutal method of execution used in China in which the victim would suffer a multitude of cuts before eventually dying of blood loss. Executioners were tasked with making as many cuts as possible and removing slices of flesh without killing the victim. This practice started in the 10th century and was outlawed in 1905, making it one of the few execution methods for which photos of it being practiced actually exist! 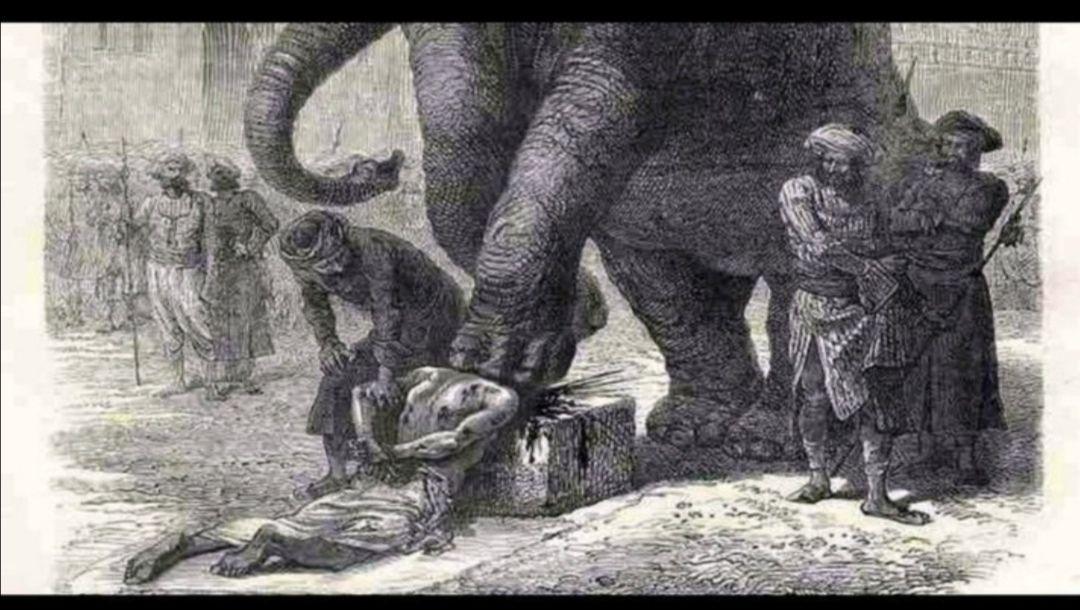 Execution by elephant, also known as gunga rao, was a common method of capital punishment in South and Southeast Asia, where Asian elephants were used to crush, dismember or torture captives in public executions. The animals were trained and versatile, able to kill victims immediately or to torture them slowly over a prolonged period.  The practice was eventually suppressed by European empires that colonized the region in the 18th and 19th centuries. The practice was also occasionally used by Western Powers, such as Ancient Rome and Carthage, particularly to deal with mutinous soldiers.

Impalement involved hammering a sharpened stick into a criminal’s body via the anus (or vagina) before then hoisting up the criminal and letting gravity pull the criminal slowly back down to the ground. The stick would eventually protrude through the victim’s head or shoulders or back, killing him, but not before he suffered hours of humiliating, excruciating pain as a sharpened stick tore slowly through his body via the initial point of entry through his body. Terrible.
9. The Culinary Horrors 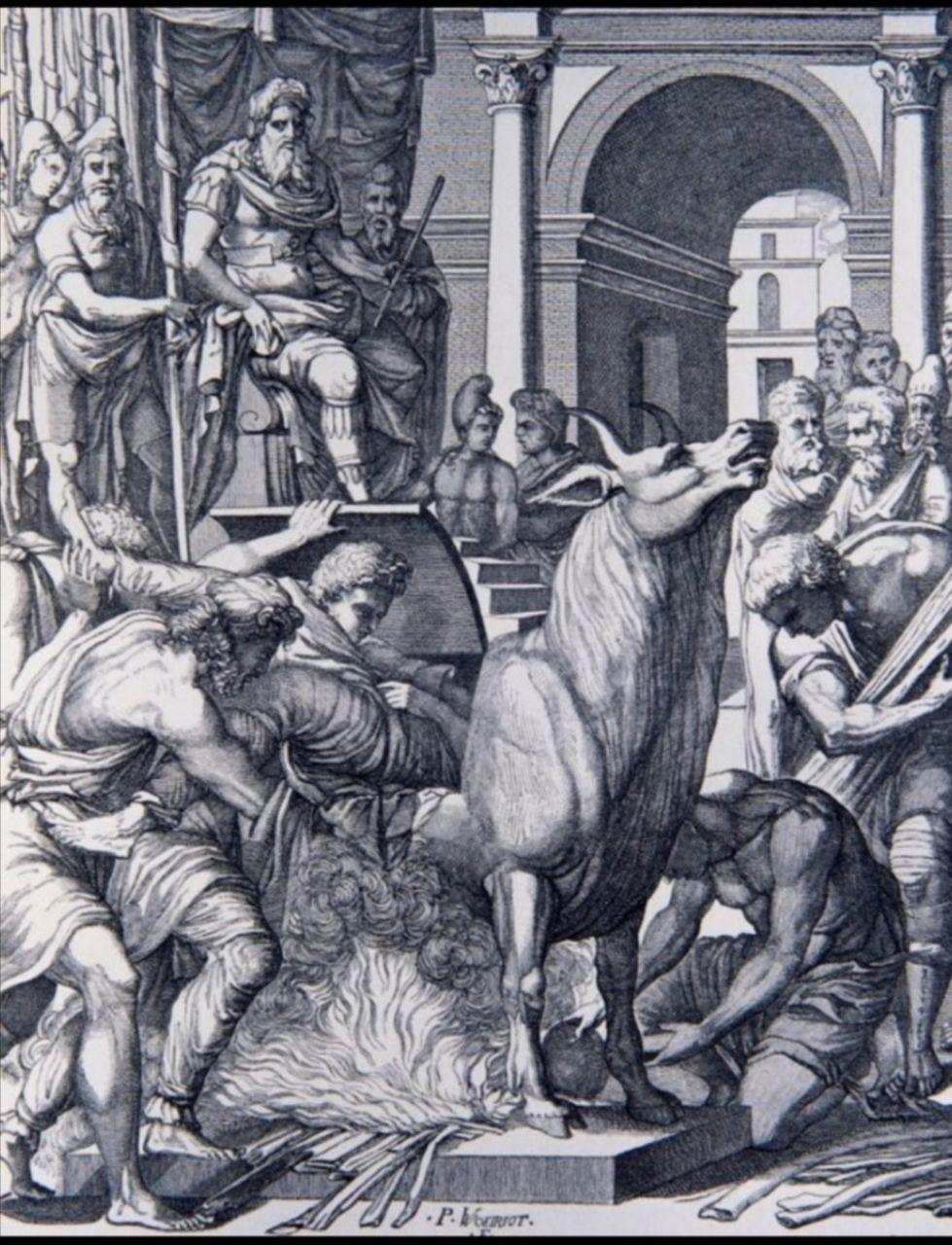 The Ancient Greeks used to punish people by cooking them inside a huge bronze bull (a.k.a. The Brazen Bull, Bronze Bull, or Sicilian Bull). A criminal was locked inside the device via a door on its side and a fire was then lit underneath, slowly burning the victim to death. The bull had small metal pipes fitted into its nose. As the victim screamed in pain, their cries played through it as a low bellow. 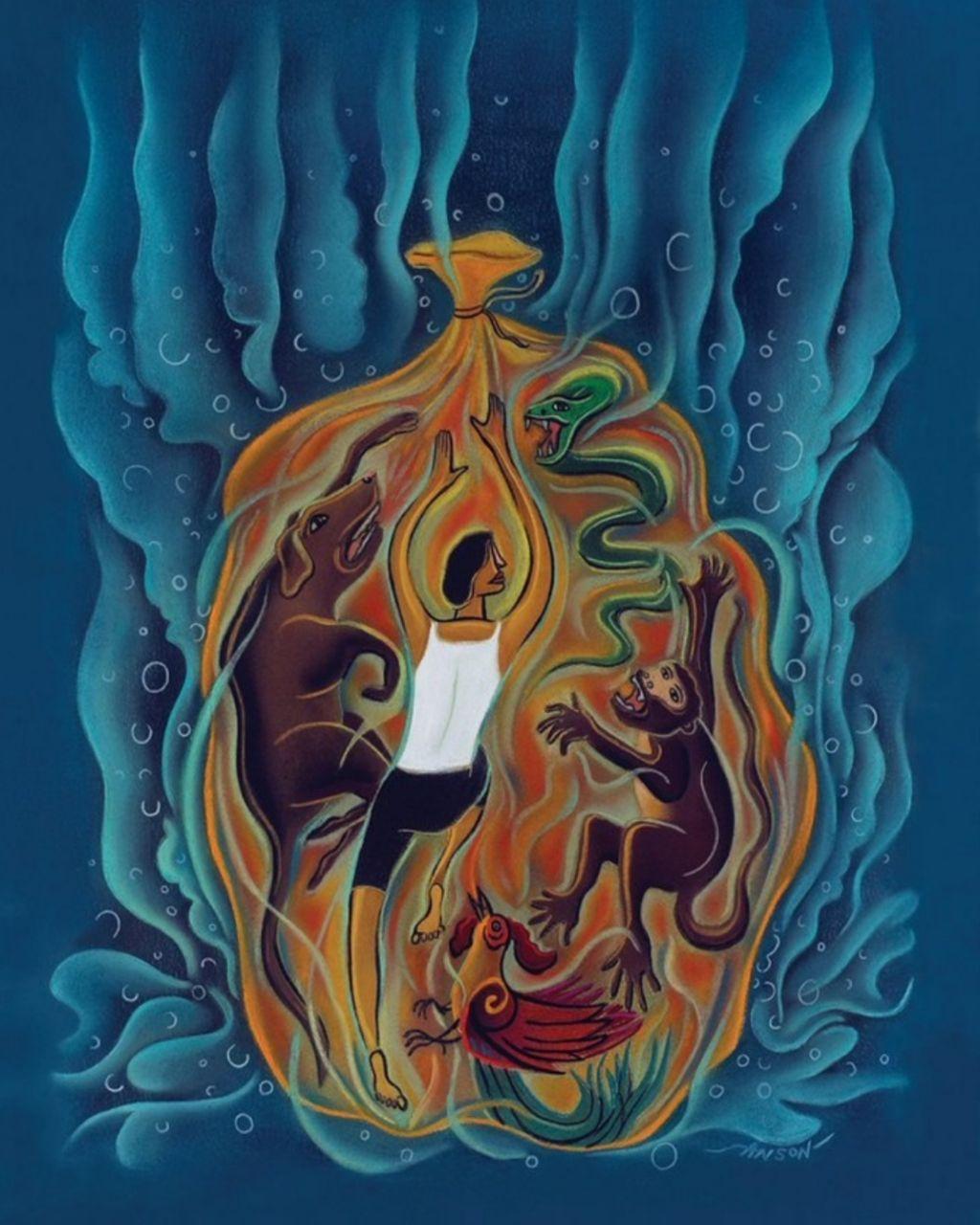 The Romans practiced a method of execution known as poena cullei. This punishment was only used for the people the Romans considered to be the worst of all criminals: parricides, or those who killed parents and close family members.

The Romans valued family and tradition above almost everything else, and killing family members was the worst betrayal of this fundamental value. For the worst of criminals, the Romans had the worst of punishments.

Poena cullei involved stuffing the person into a sack and throwing them into a river.  However, the convicted criminal was not alone in the sack. Accompanying them on their river-borne journey were various animals.

The preferred combination was a rooster, a dog, a monkey, and a venomous snake. As the sack sinks, The rooster defecates itself out of fear and now you’re covered in rooster shit. The monkey as well; monkey shit. The dog starts drooling and scratching you.

Disgusting smells, terrifying sensations all over your body, living matter swarming you and overwhelming you. This goes on for several minutes at the least and a couple hours at the most.

In any case, your death is one of sensory overload, prolonged and agonizing pain, and the greatest dishonor.

The author of the tweets says:

NotaBena:the commonly cited “boats” execution supposedly practiced by the Persian Empire is not attested to by any primary Persian sources and is widely believed to have been a literary invention by classical Greek propaganda.

The Persians were actually very lenient compared to their contemporaries and predecessors. That might be the case but the account, even if fabricated does make for wonderful reading. It is true that hell is empty and all the demons are here. #Culled and Curated.

8 of some of the dumbest criminals ever

The thieving Grandma: Who is GRACE WAKHUNGU?