Prolific Blogger Cyprian Nyakundi has signalled his intention to head to court to defend agaisnt the rights of ICT practitioners.

‘The ICT law is useless. I’ll be heading to court to file a constitutional petition’, he wrote on his WhatsApp post.

First introduced in 2016 by majority leader, Aden Duale, and supported by Kenyan MP, Godfrey Osotsi, the wide-sweeping and vague ICT Practitioners Bill mandated the registration and licensing of vaguely defined “ICT practitioners” by a council. According to the 2016 proposal, individuals who sought registration with the council needed to have completed a university education with at least 3 years of relevant experience and would pay an annual license fee. The proposal also outlined jail terms and fines for individuals who failed to comply. – ICT BIll in part

Blogger Nyakundi has been instrumental in the fight against retrogressive laws.

In 2019, he petitioned the Judiciary over Section 84D of the Kenya Information and Communications Act (KICA).

Any person who publishes or transmits or causes to be published in electronic form, any material which is lascivious or appeals to the prurient interest and its effect is such as to tend to deprave and corrupt persons who are likely, having regard to all relevant circumstances, to read, see or hear the matter contained or embodied therein, shall on conviction be liable to a fine not exceeding two hundred thousand shillings or imprisonment for a term not exceeding two years, or both. – KICA reads.

Justice Winfrida Okwany declared that the section 84D is ‘vague and limits freedom of expression’. The court ruled in a case (petition no. 214 of 208) that Cyprian Nyakundi filed through his lawyer.

This ruling was thanks to a case against the controversial blogger Cyprian Nyakundi that was made by the governors Anne Waiguru where he was sue for derogatory remarks against them back in 2018. 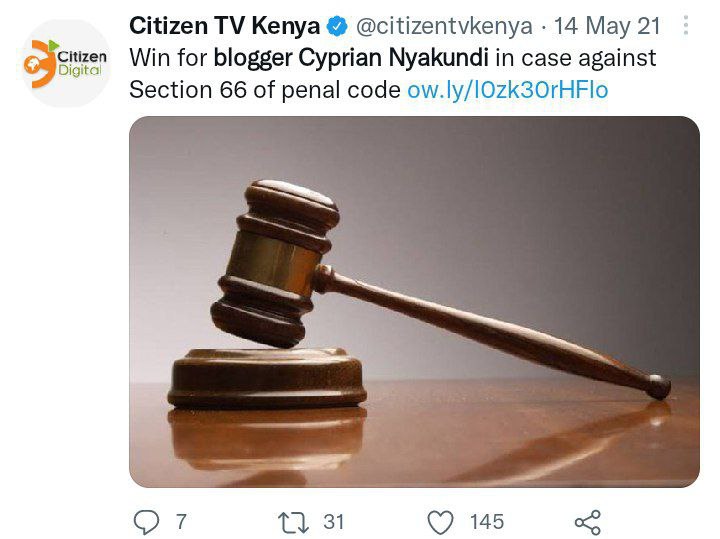 In May 2021, blogger Nyakundi won a case against section 66 of the penal code after the High court of Kenya ruled it unconstitutional.

The Penal Code states that “any person who publishes any false statement, rumour or report which is likely to cause fear and alarm to the public or to disturb the public peace is guilty of a misdemeanor.”

A person found to have committed this offense is, on conviction, subject to a custodial sentence not exceeding two years and/or a fine.

The Code further states that “[i]t shall be a defense to a charge under [the “alarming publications” clause] if the accused proves that, prior to publication, he took such measures to verify the accuracy of the statement, rumour or report as to lead him reasonably to believe that it was true.” 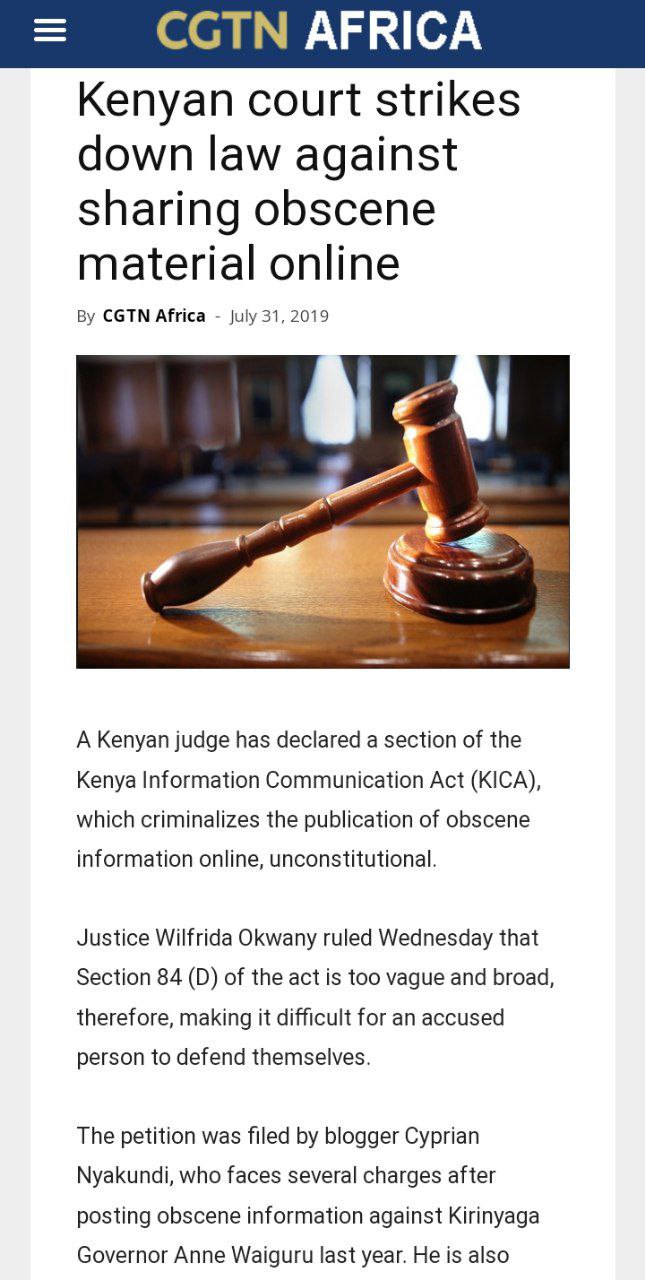 “It is difficult for one to express himself or herself without violating the said provision,” Justice Weldon Korir ruled.

The blogger has also been on the forefront in condemning the Computer Misuse and Cybercrimes Act.

Bloggers Association of Kenya (Bake), for which Cyprian Nyakundi is not part of, petitioned against section of this law but failed to have it declared unconstitutional.

Nonetheless, Nyakundi supports a similar initiative by the Law Society of Kenya.

How to lose weight when you are lazy

In a man’s mind