Talking About Twitter Suspensions: Is it time for a Kenyan grown social media platform?

I think it is time for a Kenyan-made social media platform.

Kenyans, Nigerians, and South Africans are the most popular Twitter users in Africa.

Their tweets are hilarious and they usually ‘go to war’ with each other over issues, both trivial and serious.

Most of these accounts were accused of platform manipulation; never mind, some were even dormant.

Ekoroi understands that the US social media giant is trying to reduce the number of bots as it gears up to face Billionaire Elon Musk in court this October 2022.

Maybe in a desperate attempt, the Artificial Intelligence algorithm was made with a very dire criteria to wipe out accounts and see which ones will appeal and be reinstated.

Personally, I find it counterproductive, because bots are here to stay.

In 2020, at the height of Coronavirus SarsCOV-2 disease, Twitter implemented its urgent and most intense bot removal operation.

It locked accounts, for everyone who was not verified by the platform, and asked each account to be signed in by providing mobile phone numbers where a code was sent to unlock an account.

Some accounts came back, some didn’t.

Those that didn’t come back were either, accounts of dead people, people who don’t know how to use the platform appeal mechanism (some don’t even know it exists) and bots.

As the US 2016 elections showed, some people would even create over 30,000 Twitter accounts, mostly bots, and load them into the TweetDecks.

TweetDeck had mass retweets, mass follows and mass-like feature in those days. Through these, they would manipulate trending topics with a click of a button.

Those days, Twitter didn’t require one to include their mobile phone number in their accounts.

I’ve seen that in USA, there are services that can offer fake phone numbers for Twitter accounts. So Bots are here for life.

Elon Musk and Twitter are fighting a losing battle against bots, they cannot win. They should just get a good valuation of the company, which I believe is 800 million dollars and part ways. – Ekoroi

Twitter is easy to use and doesn’t appear busy or cumbersome as Facebook. Everyone can microblog their issues and get instant feedback from their followers.

The company is fighting a losing battle and it might be on its way down in terms of shares going to zero. Thanks to Elon Musk who exposed the bot issue on the platform.

Twitter makes one feel good having followers, many retweets and also trending hashtags. The dopamine and endorphin this generates is well known to one user we spoke to.

Lagaless agreed that yesterday’s purge took out all his accounts, even after his main account was suspended.

“The 4th of August 2022 will be a day to remember in my social media life. Twitter made me, Twitter broke me. It is the first time since 2015 that I don’t have Twitter installed on my phone. I uninstalled it and cleared the cache on both my phone and laptop,” Lagaless wrote to us.

He added, “I have made money on Twitter, and as most agree, the roller coaster of opening accounts, gaining followers and having the suspended is not for the fainthearted. It is truly disheartening, to say the least”.

Twitter has put a stop to many people’s source of livelihood.

Another executive from a FinTech firm also commented on his company accounts suspension:

Many other Kenyans Ekoroi spoke to also intimated about moving fully to Facebook.

However, my experience shows that many will do this for a week or two and then miss Twitter.

So here is a question for you:

Will you sign up for a Kenya-made social media platform that has the characteristics of Twitter, with a tinge of Facebook (not as cumbersome) and TikTok combined?

It is in the making.

I’ve seen it; it is very user-friendly on pc and mobile.

Twitter Down: Social media platform logs out users in Kenya

Some users of Twitter Inc complained about being logged out of their accounts at around 3 p.m. East African Time.

“Error…Something went wrong, but don’t fret — it’s not your fault. Let’s try again.”, was the message displayed repeatedly as ne tried to log back in.

Saturday morning, some users had experienced reply or quote tweets going into drafts. Some tweets containing pictures could also not be sent.

This anomaly corrected later after about an hour or so.

11 hours ago, some Twitter users around the globe reported a widespread outage.

On Friday, Twitter Inc said that it was working on fixing an access issue after thousands of users reported problems with the platform.

“Tweets may not be loading for some of you. We’re working on fixing a problem and you’ll be back on the timeline soon,” the company said in a tweet.

Around 40,000 users reported issues with the social media platform Friday, according to outage monitoring website Downdetector.com.

Downdetector tracks outages by collating status reports from a series of sources, including user-submitted errors on its platform. The outage could have affected a larger number of users.

In October 2020, Twitter experienced technical issues — which lasted for more than two hours — that prevented users from tweeting. The company blamed the problems on an “inadvertent change to our systems.” That outage affected users access across the U.S., Europe and other parts of the world.

Twitter is one the easiest social media platforms to use, however, sometimes, the lag sets in and one doesn’t really look carefully at which account they are tweeting from; and oops, there goes a tweet that was not supposed to be posted.

That mistake is often made by account administrators, who are required, by virtue of work, to sign into multiple accounts.

Though there’s nothing like NIC bank anymore, because the bank merged with Commercial Bank of Africa (CBA) to form NCBA, there was a time that the bank’s Twitter account admin had had too much betting.

In March 2020, the year of pestilence, coronavirus and lockdowns, the account administrator for DSTV let his/her heart out on how he/she felt about the firm.

Have an enjoyable day

KCB Bank Group is one of the biggest banks in the East African region. Headquarter from Kenya, you would think that they hire very smart and patient staff. On 100th December 2019, the banking code training left one of their staff as he/she displayed customer account details that he/she is not supposed to. Was he/she fired for this?

Have a wonderful day!

Have a porn-free day

Just a few hours ago, the Equity Bank Twitter admin, obviously tired from the chaos that has been directed against the thieving Bank in the past two days decided to show a middle finger to a client. Oops, he didn’t deserve it!

Have a fingerless day

The correct name, Building Bridges Initiative – BBI, seeks to iron out issues among Kenyans, since it has always been leaders who for some reason are too bad than Kenyans who vote for them. 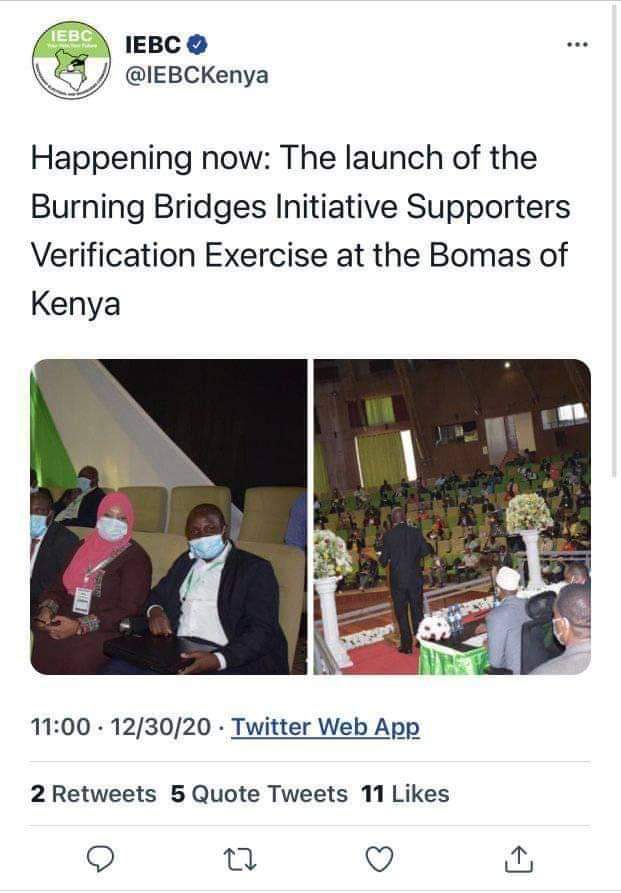 The turkish-owned TV station was so hurt as to respond to one of its ‘sacked’ staff Benji Ndolo. Wednesday afternoon, Mr Ndolo has treated his followers on Twitter with some revealing tweets exposing the mistreatment of employees at the station. The slave-like working conditions, according to him, are captured below:

As we exchanged words in the boardroom with voices raised, there was pin drop silence in the entire office…I realized everyone was listening very keenly and instantly knew I was speaking for many. Toxic stuff happening daily in the work space and especially in MEDIA houses. – Benji Ndolo on Twitter

The firm without thinking through, posted a private and confidential letter, firing Benji Ndolo

Have a thoughtful day

I hope you had fun, thank you for reading.

Send any more blunder that we have left out to contact@ekoroi.com

Twitter Inc users in Kenya are reporting broad problems accessing the service Friday morning across as from 0100HRS.

Users in other parts of the world, in the U.S. and parts of Europe are also reporting the same.

A notice posted on Twitter’s status page at 5:56 p.m. ET said the company was “Investigating Irregularity with Twitter APIs.”

This outage might not be the first one today, a Twitter user told Ekoroi.com that he noticed something strange with the social networking app earlier in the night.

‘I noticed that Twitter was behaving abnormally a few minutes past 8 pm, East African Time’, the Kenyan on Twitter (KoT) said.

Some users in US had stated that the company was deliberately slowing down the app in order to cool down the political temperatures over the exposé of the son of Democratic Presidential candidate Joe Biden.

The other scandal is where the younger Biden was reported to have asked for a USD10 million (Sh1 billion) bribe from a Chinese businessman so as to arrange a meeting with his father while he was Vice President.

Pain of losing business: A Kenyan writes to Twitter about locked accounts

Your systems for verification is broken.

How comes you ask people to verify their accounts using phone numbers but then go ahead to make the request for code fail.

For example, as a Kenyan, I have 98 per cent chance that if my account is attached to a Airtel or Telkom line, it will fail.

Most Kenyans thought Safaricom lines do not fail (mostly true 90 per cent of the time), but that was true to me untill this week on Wednesday 14th October 2020.

Three accounts that I manage for corporates and one for personal use asked for verification through call and to my shock failed.

We know that you have moved from requiring verification through emails to phone numbers. But please make it easy for this to be done.

You can start by removing the ‘call me’ verification, what’s the use of it anyway? it always fails?

You might argue that it removes the chances of an account being run by a robot, but which robot can input codes?

Asking for our phone numbers is enough; locking accounts incessantly is unnecessary.

You’ve made the lock-verify-account, a bi-weekly exercise. It is wrong! Stop.

If you don’t change these things, Twitter will Jiongelesha soon as other social media platforms becon.

Most are moving to GScroll.com.