Why Luos Referred To Late President Moi As Wuod Odongo

You’ve probably heard the Luo referring to President Moi as ‘MOI WUOD ODONGO’ meaning ‘Moi son of Odongo’. May I report on its etymology? Be my guest.

Sorry, etymology means origin of something. Story behind the story. Look at me always thinking everyone on this app is at my level of pedagogy. Ha!

On becoming President in 1978, community delegations were falling over each other as they scrambled to get the President’s attention in those never-ending State House visits. The Luo were not left behind

Odongo Omamo and Onyango Midika were among the notables who led Luo delegations to State House Nairobi. And they were happy to point out to the man from Sacho that it was indeed their son Mwalimu Thomas Wasonga who was belting out tunes after tunes in praise of the new president

I know because I read Odinge Odera’s book MY JOURNEY WITH JARAMOGI that has reams and reams of paper detailing the role played by ethnic delegations in shaping early days of Moi presidency. Another confirmation is in Njenga Karume’s book BEYOND EXPECTATIONS.

Onyango Midika Janyando and Odongo Omamo were quick to point out to Moi that the Luo were the happiest to have him as president because if not for anything he was ‘one of our own’. We share a rich history of NILOTIC ancestral lineage, they reminded Mkulima namba moja.

You still with me? By the way, did you take GHC lessons? Maybe yours was Social Studies. So you know Joka Jok, Jokowiny, Joka Kong’o, Joka Ndawa, Joka Jojuogi…. I made that up. Don’t take it serious. Anyway keep reading

THIS IS THE NILOTIC ANCESTRAL TREE. I wanted to be a doctor. You can tell by that handwriting. ha! 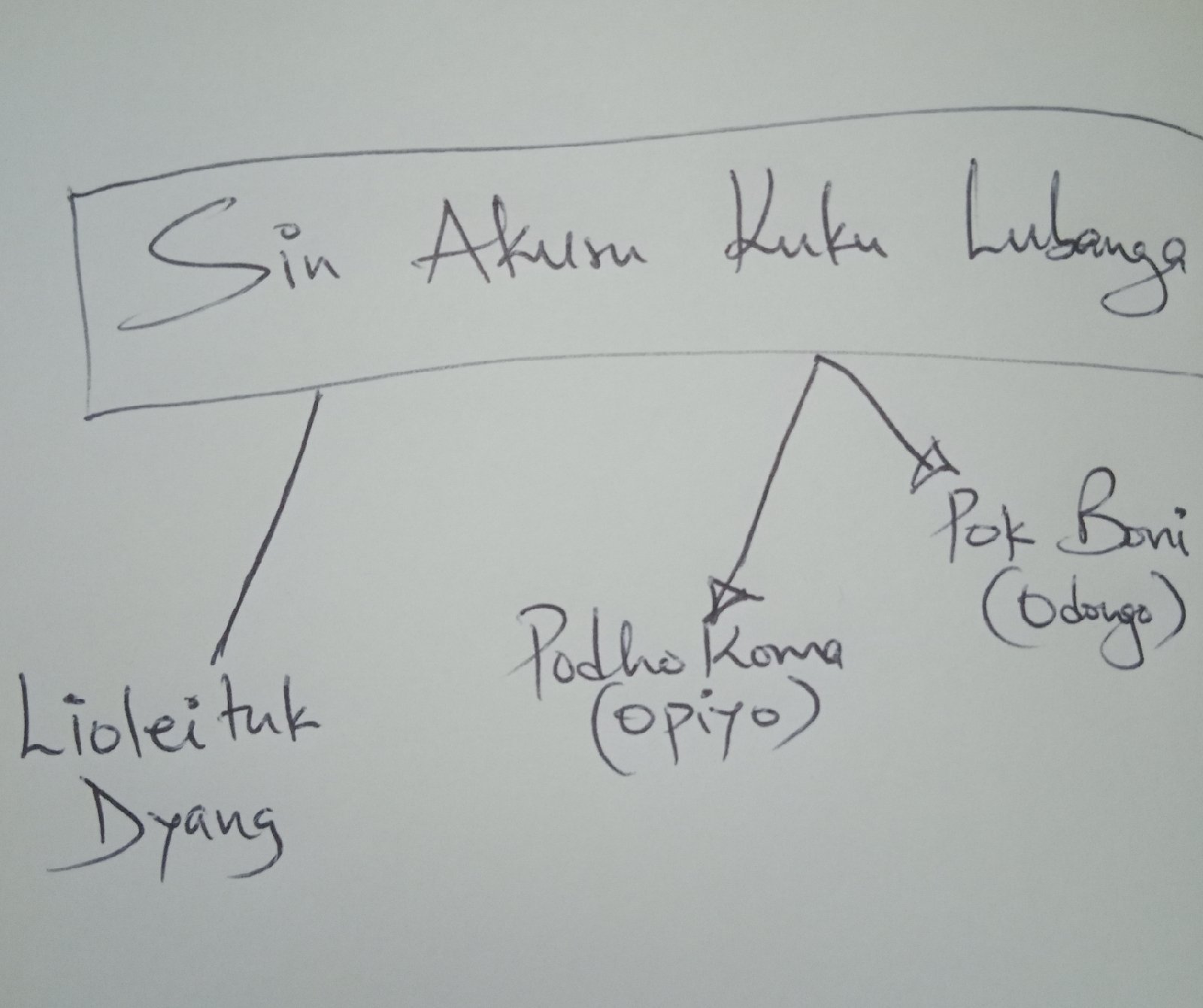 I know the Nilotic family tree because I widely researched on it. I got a richer reading on it from Prof Ogutu’s book LUO SOCIAL SYSTEM. 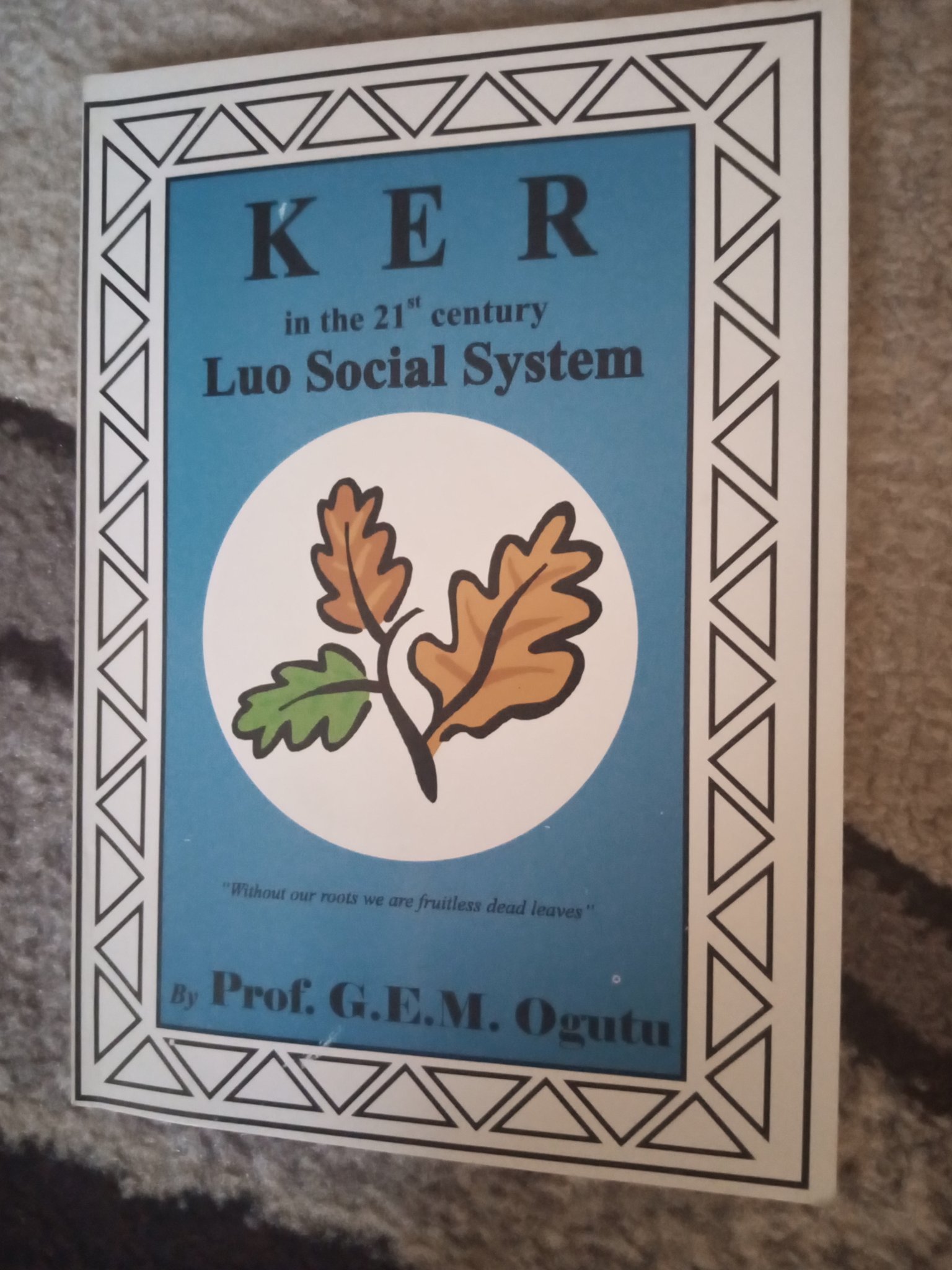 Prof Ogutu is the man who is famed with attending Maseno School, Alliance, Makerere and Oxford. He proudly struts around corridors of UoN with the 4 badges dangling on his green Makerere jacket. He also hesitated to meet me coz I studied in KU, a school named after an individual

Back to our story.
SIN AKURU KUKU LUBANGA, the father of Nilotic speakers lived in Dog Nam around the present day Lake Turkana and Baringo around the 2nd century BCE.

The other two sons were twins:

PODHO KOMA was the first of the twins. His descendants are the present day Luo of Eastern Africa. Among the Luo, the first of twins is called OPIYO coz he came out piyopiyo very first. APIYO, if female.

By the way, the topic is still about why the Luo refer to President Moi as MOI WUOD ODONGO – Moi son of Odongo. We’re getting there shortly

POK BONI was the last of the twins. He is father of the present day Highland Nilotes; Turgen, Marakwet, Kipsigis, Nandi….the Kalenjins.
Back to the Luo. The last of twins is called ODONGO. The one who remains with the placenta. Odong’-go. Has remained with. ADONGO, if female

The Luo delegations pledging allegiance to Moi in the wake of the new presidency in 1978 to early 80s were well aware of their siamestic history and did not waste time to remind the president that the Luo must be proud to be close to power.

You are one of our own. Are you not Wuod Odongo, brother to Podho Koma our ancestor? Count on us for support. They lavished Mwalimu Namba Moja with hagiographic praises.

The Wuod Odongo reference has been used to refer to President Moi for so long that to some, it is Moi the individual rather than group reference to the entire Kalenjin nation.

Understandably so because of dominance. He was the most notable Kalenjin figure for many years. Anthropologically, the alpha masks all the other pieces to a point of ignorance.

Charles Odhiambo from Radio Ramogi reminds me that only Raila Odinga gets the Kalenjin baptismal name Arap Mibei – born near the large waters. Again, dominance.